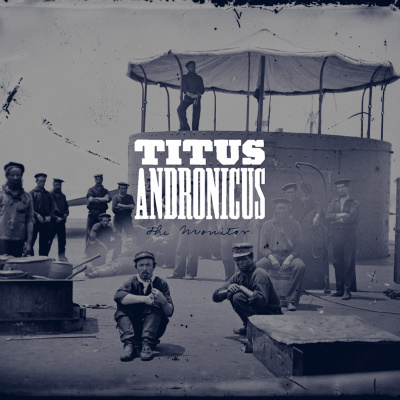 To honor the inauguration today, I'm going to talk about one of my favorite punk albums of all time, Titus Andronicus's The Monitor. This album is sort of a concept album framed around the Civil War juxtaposed around a break up and modern general anxiety.

Sonically, this album sounds awesome. The guitars are loud, but never overpower the vocals and the riffs will remind you of Bruce Springsteen meets Civil War marches meets traditional punk rock. This album will make you want to overtake the means of production cause it rocks so hard. There are also softer songs, like To Old Friends And New, which feels like a punk rock power ballad.

Give me a kegger on a Friday night

Give me anything but another year in exile

Let's talk about the concept of this album, because it's what makes this album really special. The album opens with the lead singer's high school history teacher reading a part from an Abraham Lincoln speech and then immeditely cuts to the lead singer (Patrick Stickles) singing about moving from Jersey to Massachusetts after a bad break up. Throughout the album, there are more Civil War quotes that fit perfectly with the album. Using the backdrop of the war, topics like relationships, addiction, and just general anxiety are explored.

There'll be tall gallows for everyone

This album benefits from repeated listens as well as following the albums lyrics on Genius. This is because Stickles makes a lot of references that you probably won't catch on the first listen (no joke, there is a Springsteen reference followed by a Rakim quote in the first verse).

The enemy is everywhere

But no one seems to worried or care

My favorite part of this album involves the lyrics above. They first appear on Titus Andronicus Forever, which is the second song, and it seems like a throwaway punk song with a simple chorus. Then, a bunch of long sad songs happen, and out of nowhere, this chorus repeats itself on ...And Ever with added Springsteen-ish saxophone.

This is a war we can't win

And my heroes have always died at the end

In closing, I don't like to get super political, but I would suggest diving into this album with the headspace of the next 4-8 years being extremely regressive with the government being run by people that are simultaneously corrupt and incompetent. Yeah, get angry, listen to this album, and prepare for the war we are about to fight.